The expectation of Nigerians from the new service chiefs is humongous – George Moghalu, NIWA boss

The NIWA boss stated that there was total breakdown of infrastructure in Nigeria before President Muhammadu Buhari came into office.

He disclosed that no road was tarred in the South East by the PDP administration for 16 years until APC came to the rescue in 2015. He cited the Enugu- Onitsha Expressway and the second Niger bridge which is nearing completion as some of the projects paid for by Buhari’s administration.

The former National Auditor of the APC who spoke on Nigeria Right Now, a current affairs programme anchored by Dickson Iroegbu on Africa Independent Television AIT on Thursday and monitored by Daily Blast argued that there was a systemic security failure particularly in northern Nigeria until Buhari seriously tackled insurgency by providing the needed machinery for the armed forces even though insecurity has not been totally eradicated.

On reshuffling the security architecture and appointing new service chiefs, the former governorship aspirant in Anambra state insists that expectation of performance from the new service chiefs was massive and humongous.

“I appeal to every body to pray and support the new service chiefs. I owe them prayers and support because security is everybody’s business. For me, the key to security is information gathering and you need the people to give you information. It is about community involvement. Government has responded to the demands of the people by changing the service chiefs. Let us give them a chance to work.” Moghalu said.

On the issue of sidelining the south east from key appointments in the Armed Forces, Moghalu feigned ignorance of the reason.

“I know Mr. President is cautious about appointing the right persons into the right position. I don’t think the south east is marginalized in this administration. No geo-political zone is marginalized because if you don’t give me biscuit but give me bread, you have given me something. Am I from the north west? I am from south east. There are other key political appointees who are from the south east. Our sister from the south east is now the ambassador to the United States of America. This is the first time a woman is occupying such position. Doesn’t that call for celebration? We will keep asking for more appointments.”

Dr. George Moghalu while answering questions about the fight against corruption declared that presently in Nigeria, nobody can steal money without watching his back unlike in the past when people were stealing public funds with impunity.

“Government is fighting corruption frontally even at the highest level. There are no sacred cows in this government.”

2021-01-30
Dailyblast
Previous: EFCC arrests stundents of yahoo-yahoo school in Abuja
Next: Not all Fulanis are criminals – Sultan of Sokoto 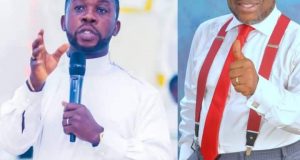